5/5/2014
Journey begins at 5:15 AM with a ride down I-95 to the Philadelphia International Airport. Check-in at U.S. Airways went well and the “suitcase” was checked-in at 35.5 lbs.  The “suitcase” has enough soap and toothbrushes to cleanup a small village. We’ll see how it goes! 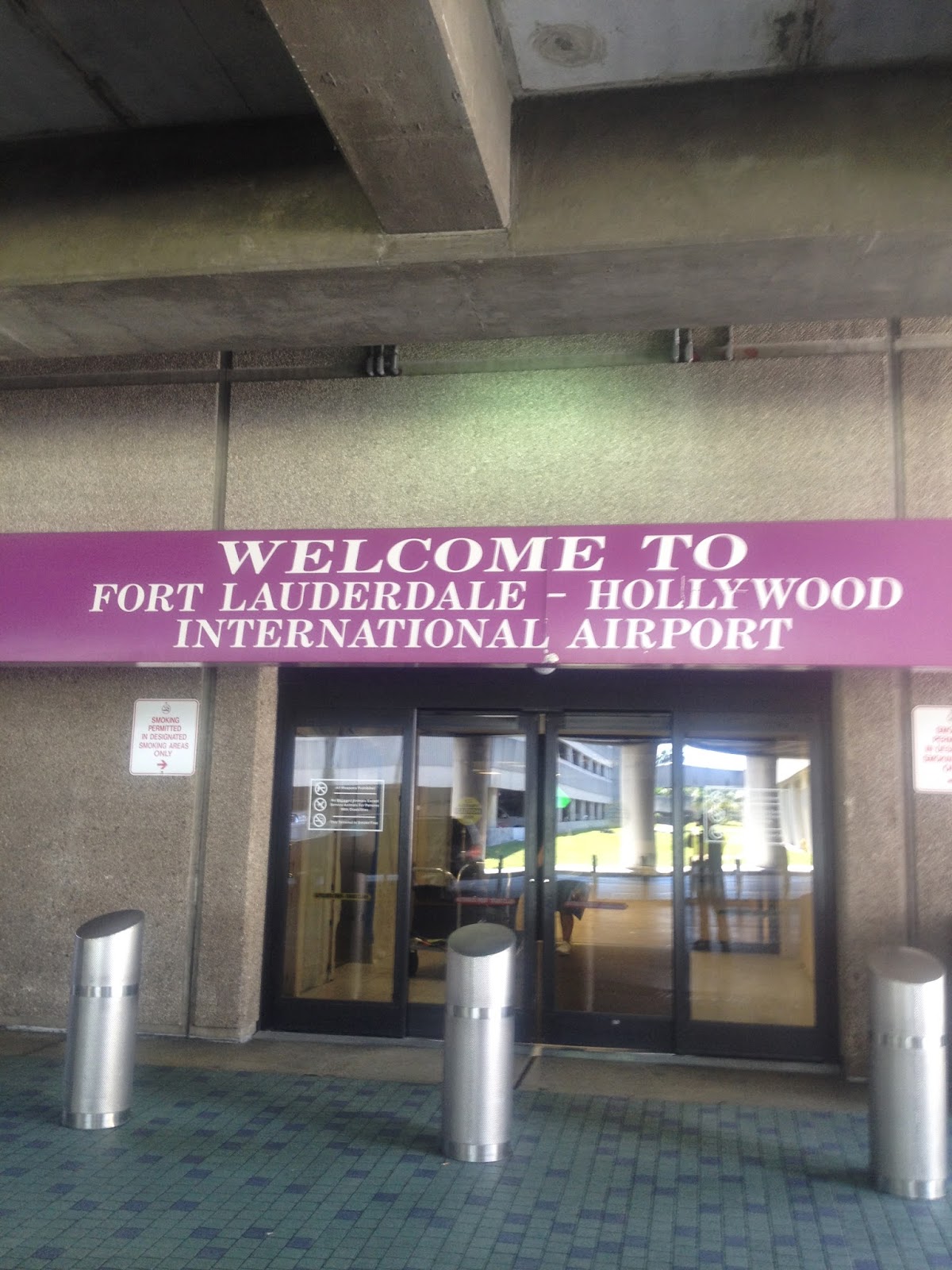 U.S Airways Flt 1950 left on-time (7:55 AM) and was an extremely smooth ride to Ft. Lauderdale FL.  We arrived at 10:37 AM and waited for four of our team members until 12:15 PM.  Once we had everyone, we headed to the Food for the Poor headquarters.  A statue greets you right inside the door showing Jesus in a very humbled position - which sets the tone for the organization. 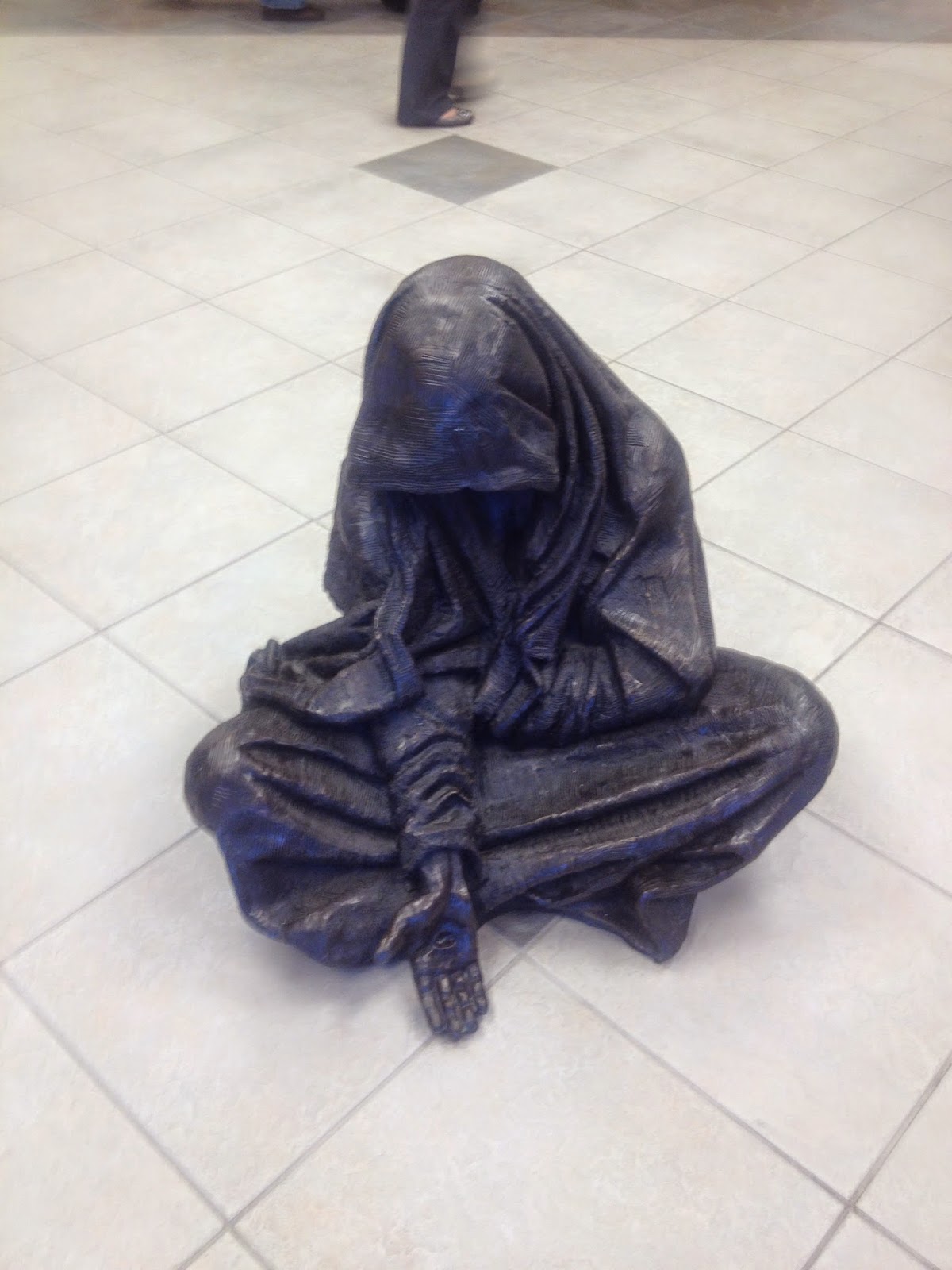 We completed our welcome luncheon and got a chance to meet all of the members of the team.  We have a pretty diverse group - folks from Arizona, Kansas, Connecticut, New York, Wisconsin and Florida - led by a priest from Jacksonville FL., who is quite a character.

After a debrief with the President and CEO of the organization, we toured the facility and met staff members who provided insight into their various rolls.  An extremely emotional day and we haven't even made it to Haiti yet!!!

A team dinner and meeting was held at the hotel at 6:00 PM to go over the plan for Tuesday in-country. This ended a very long day.

Arrived in Port-au-Prince Haiti at 7:40 AM and cleared Customs pretty easily.  Charter bus was waiting for us and took the team to a Food for the Poor sponsored school - Ti Ayiti School - where we interacted with the children.  We had candy, coloring books and crayons for the students who seemed very curious about us.  They were very friendly and responded to us in a friendly manner. 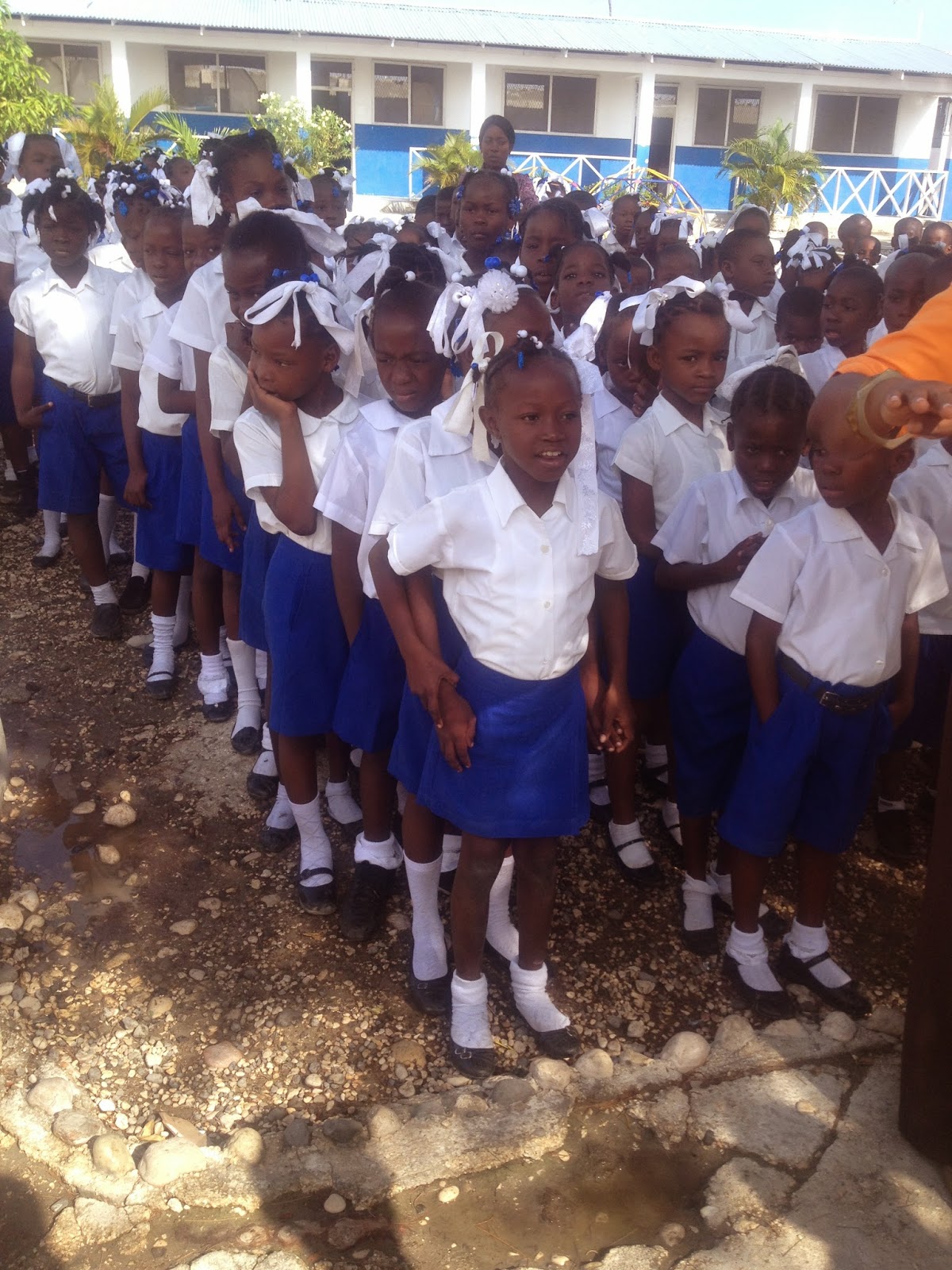 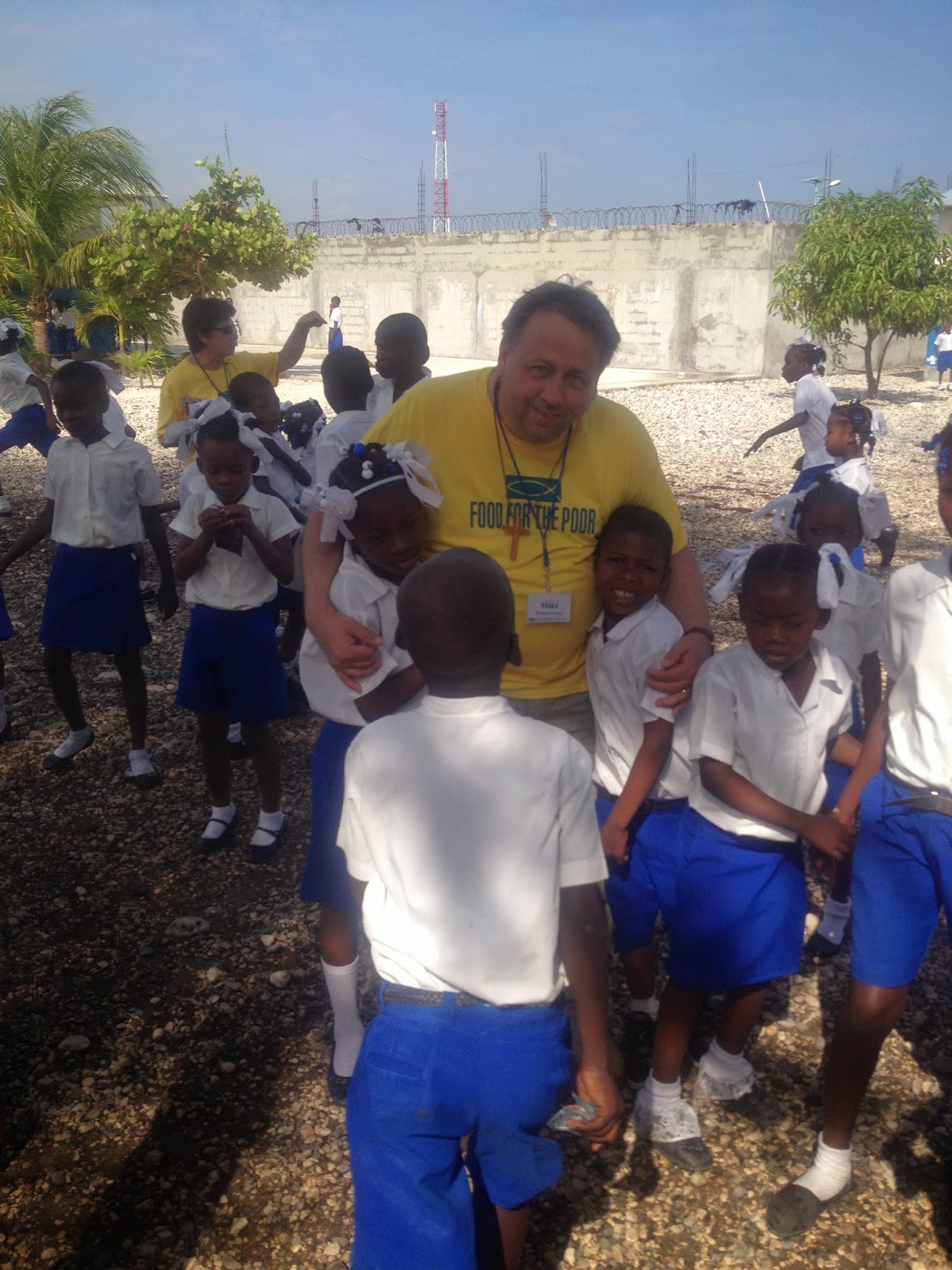 In fact, Tom was a real hit once the children realized he had tattoos.  Check out their reaction! 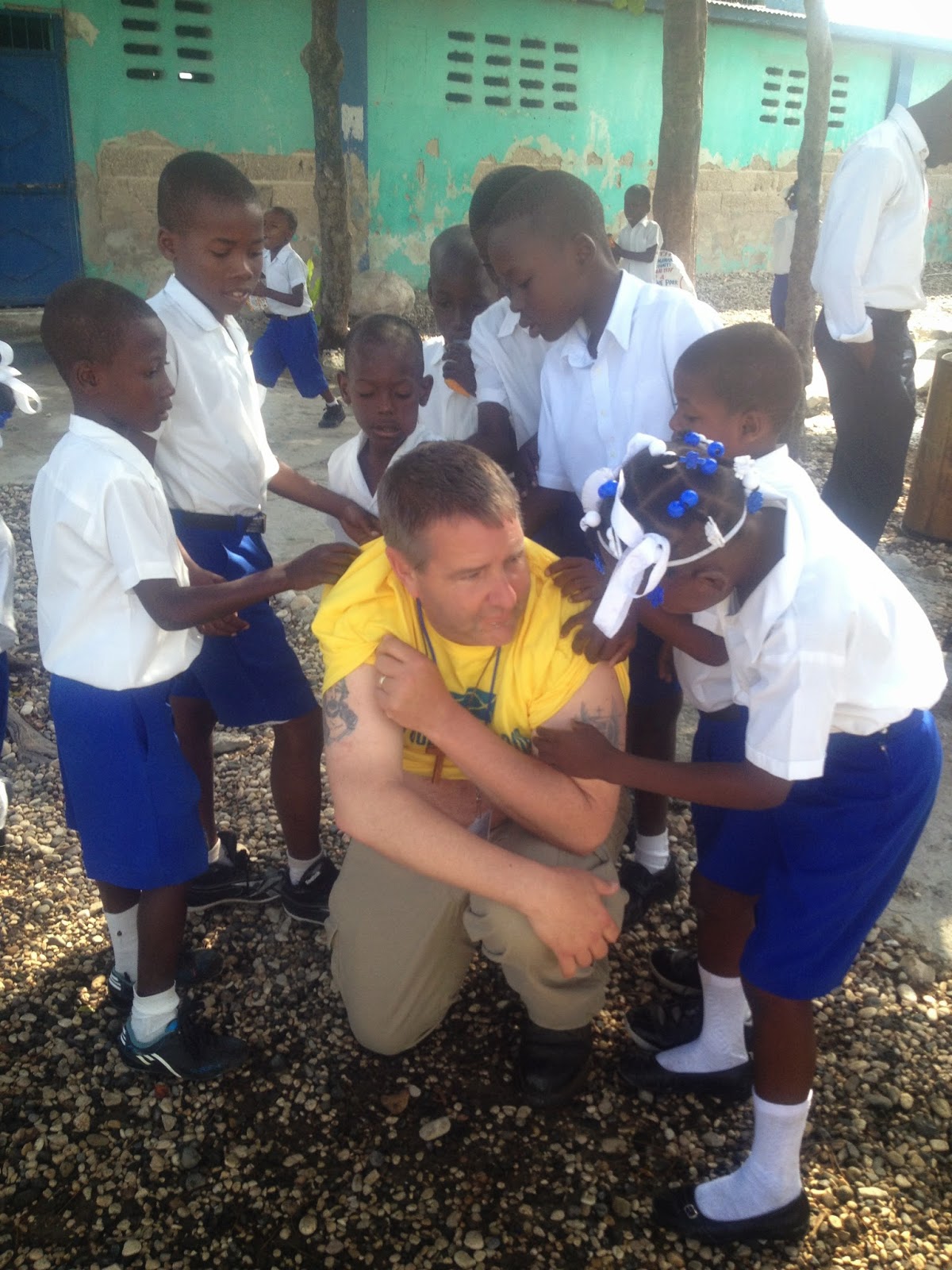 After we left the school, our next stop was a Food Distribution Center where we met with local management team and helped with the lunch operation.  The Center feeds over 15,000 people a day - 365 days a year! 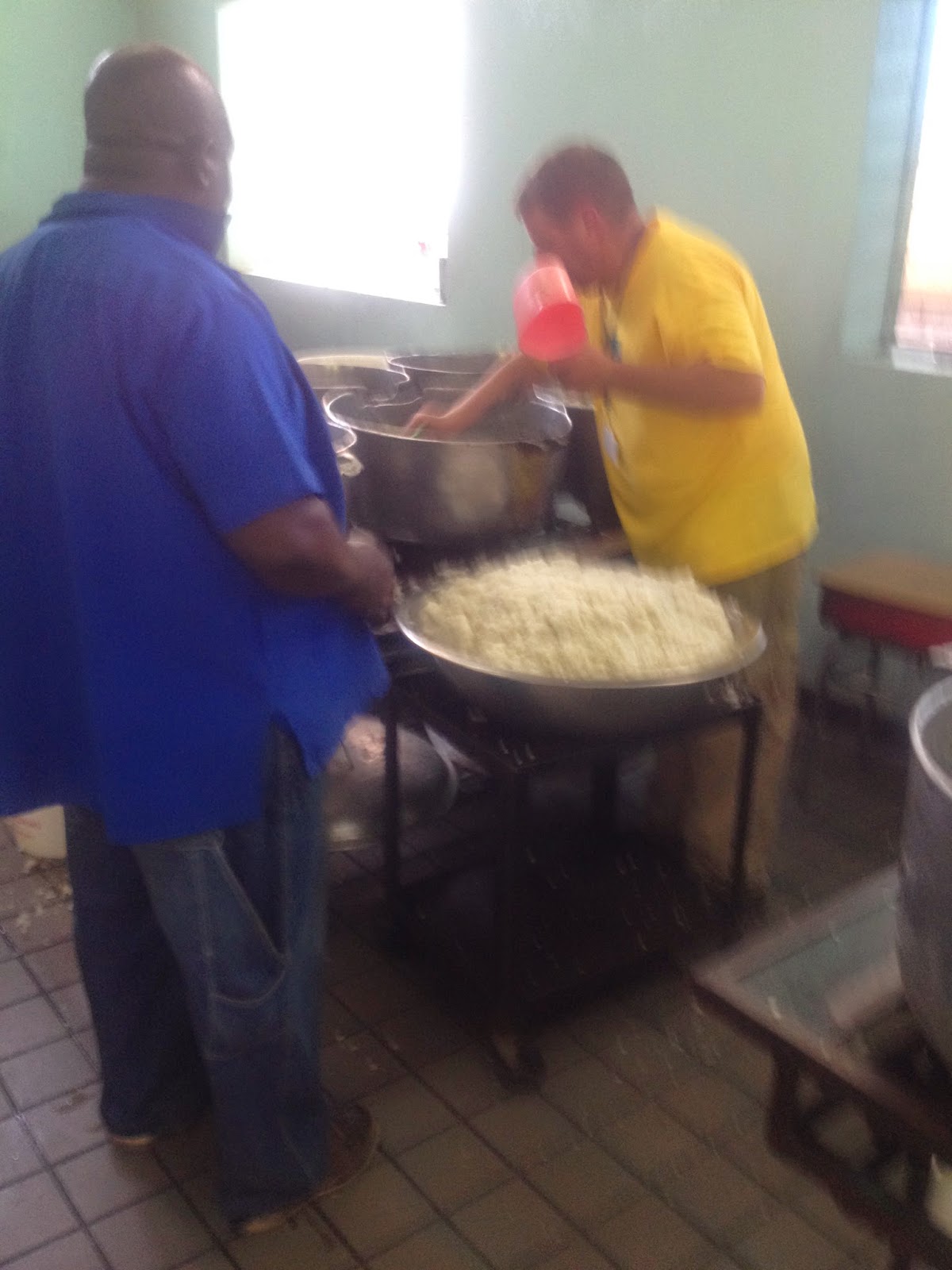 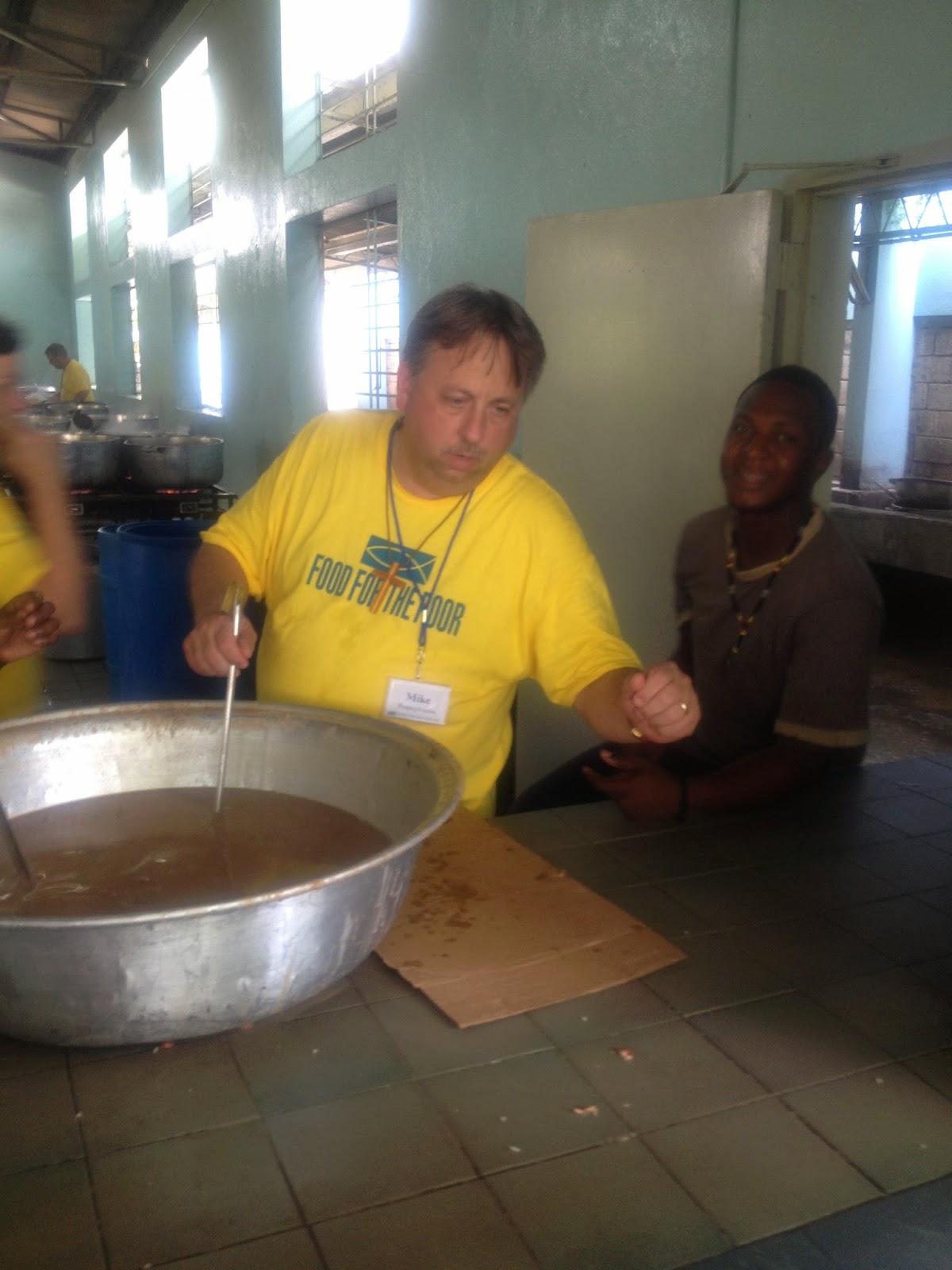 In the afternoon, our team visited a hospital (Bernard Mev's Hospital) in downtown Port-au-Prince.  We toured a pediatric ward and saw some of the worst conditions you could imagine!!!  The staff does a fantastic job with what they have available - but it is way short.  They conditions were so bad that I will not include pictures of the ward.  We also toured the hospital's prosthetic's lab - they are still serving thousands of amputees from the earthquake in 2010. 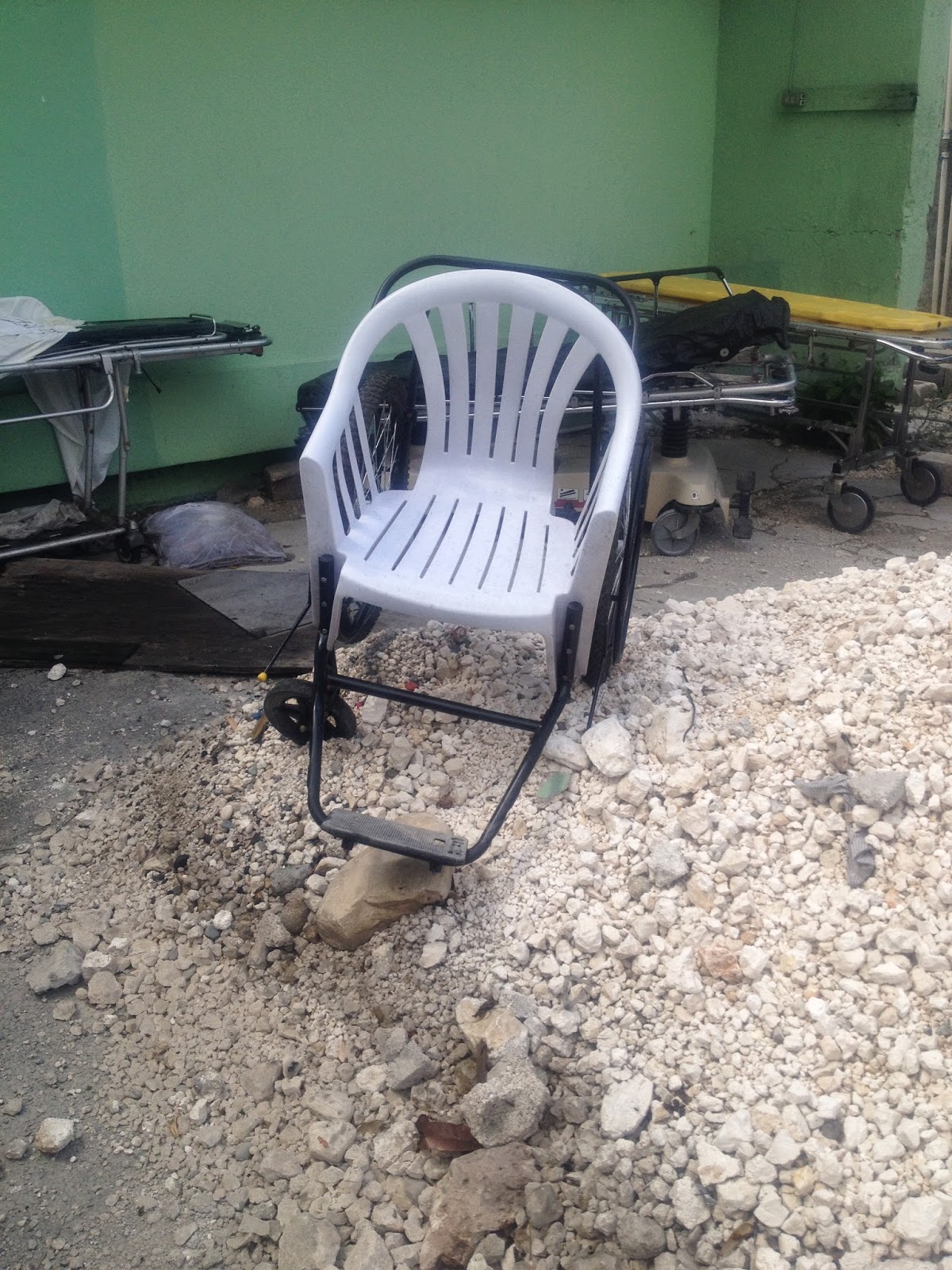 After leaving the hospital, we traveled through downtown Port-au-Prince to our hotel.  I have included one picture which sets the tone for the living conditions in the capital city. 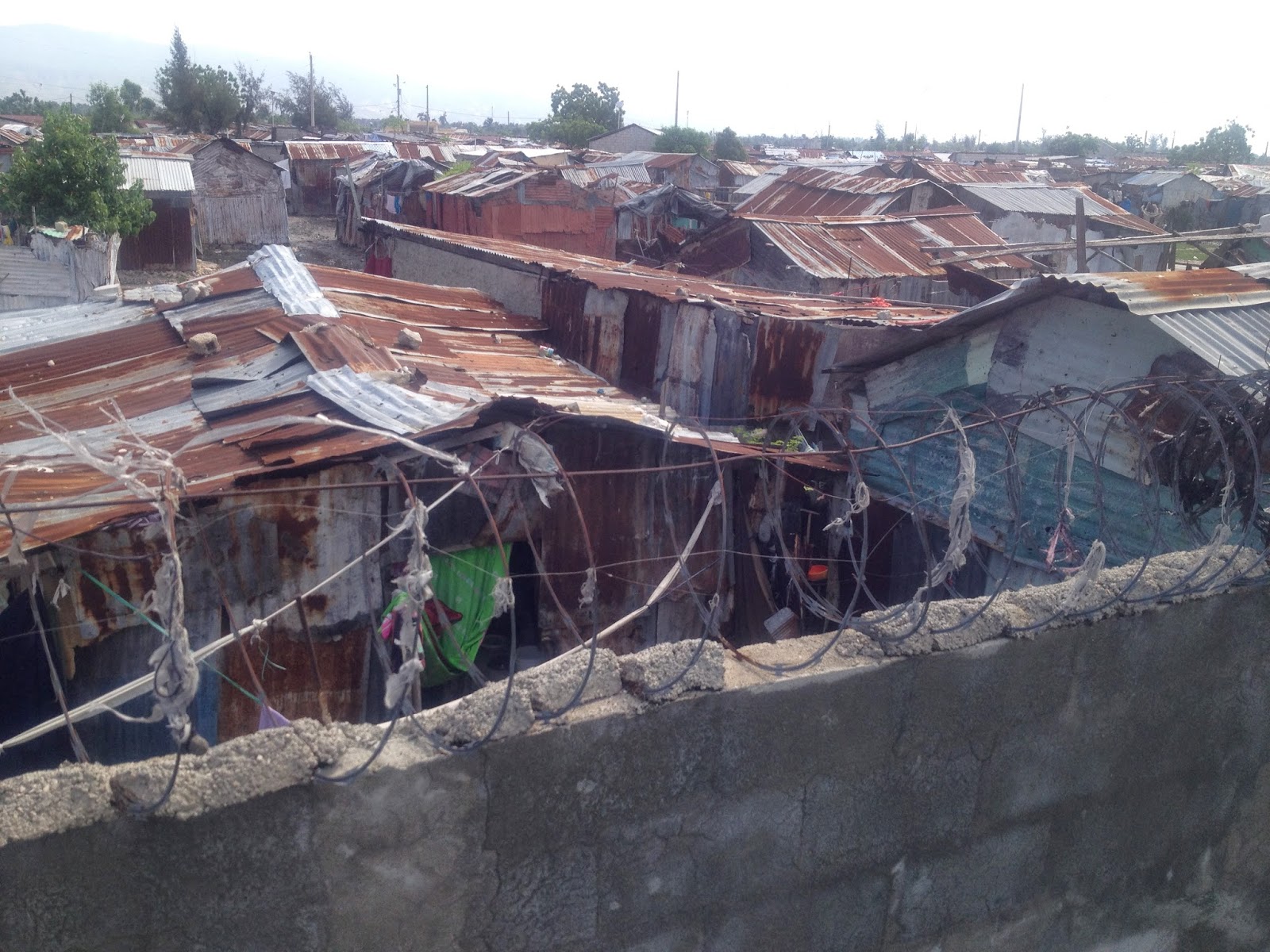 A full day has ended and we prepare for tomorrow.

5/7/2014
The day begins with breakfast at 7:00 AM.  Breakfast is the only meal which resembles a U.S. meal with toast, scrambled eggs, French Toast, etc.  The team departs the hotel at 8:00 AM for the rural town of Titayen.

At Titayen, we are visiting a boys and girls orphanage and school.  Some history about Titayen - during the Poppa Doc and Baby Doc regimes, Titayen was the area where the "disappeared" were interned.  Shortly after the earthquake in 2010, tens of thousands of bodies from Port-au-Prince were buried in mass graves to limit disease in the capital. 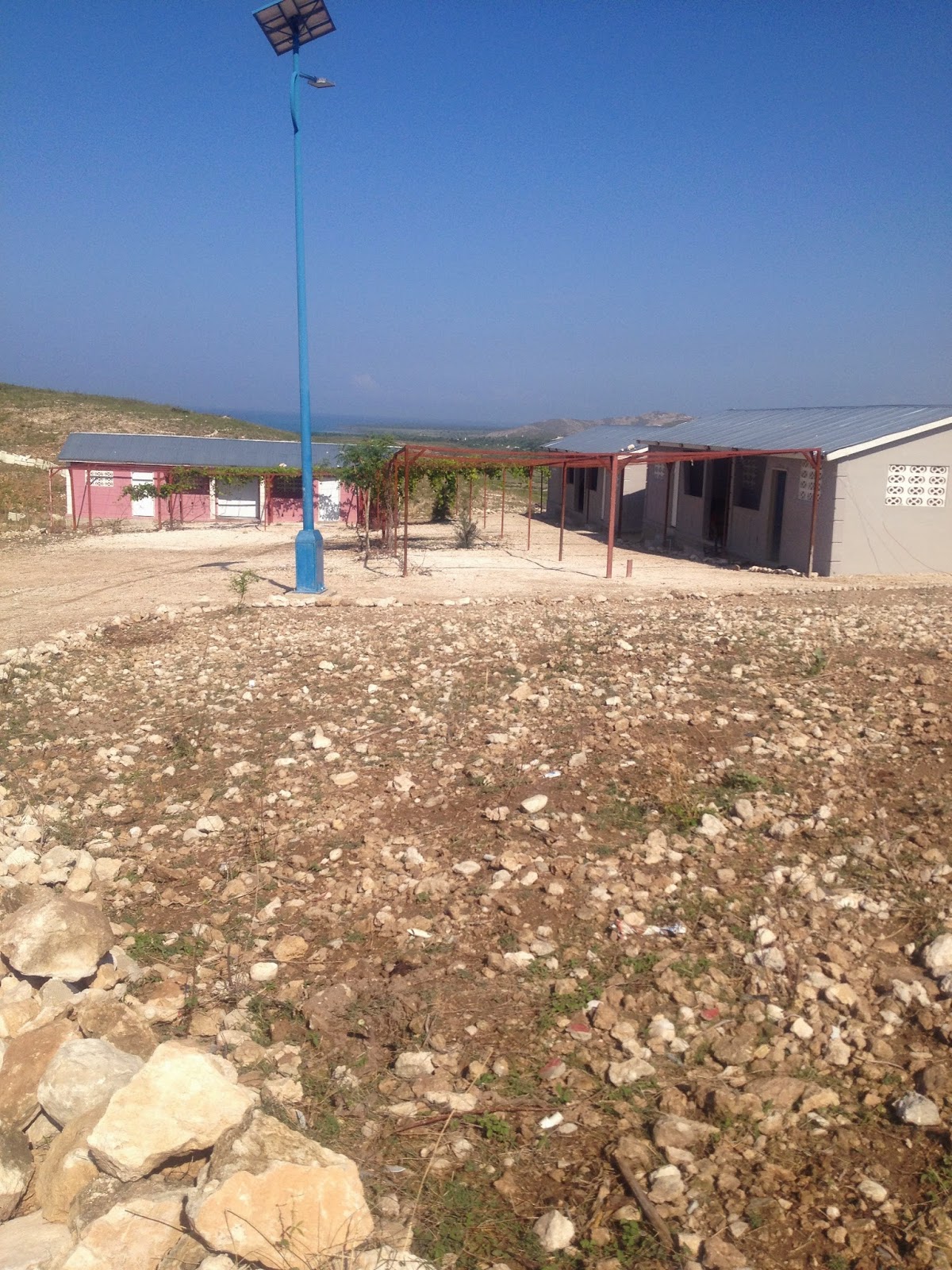 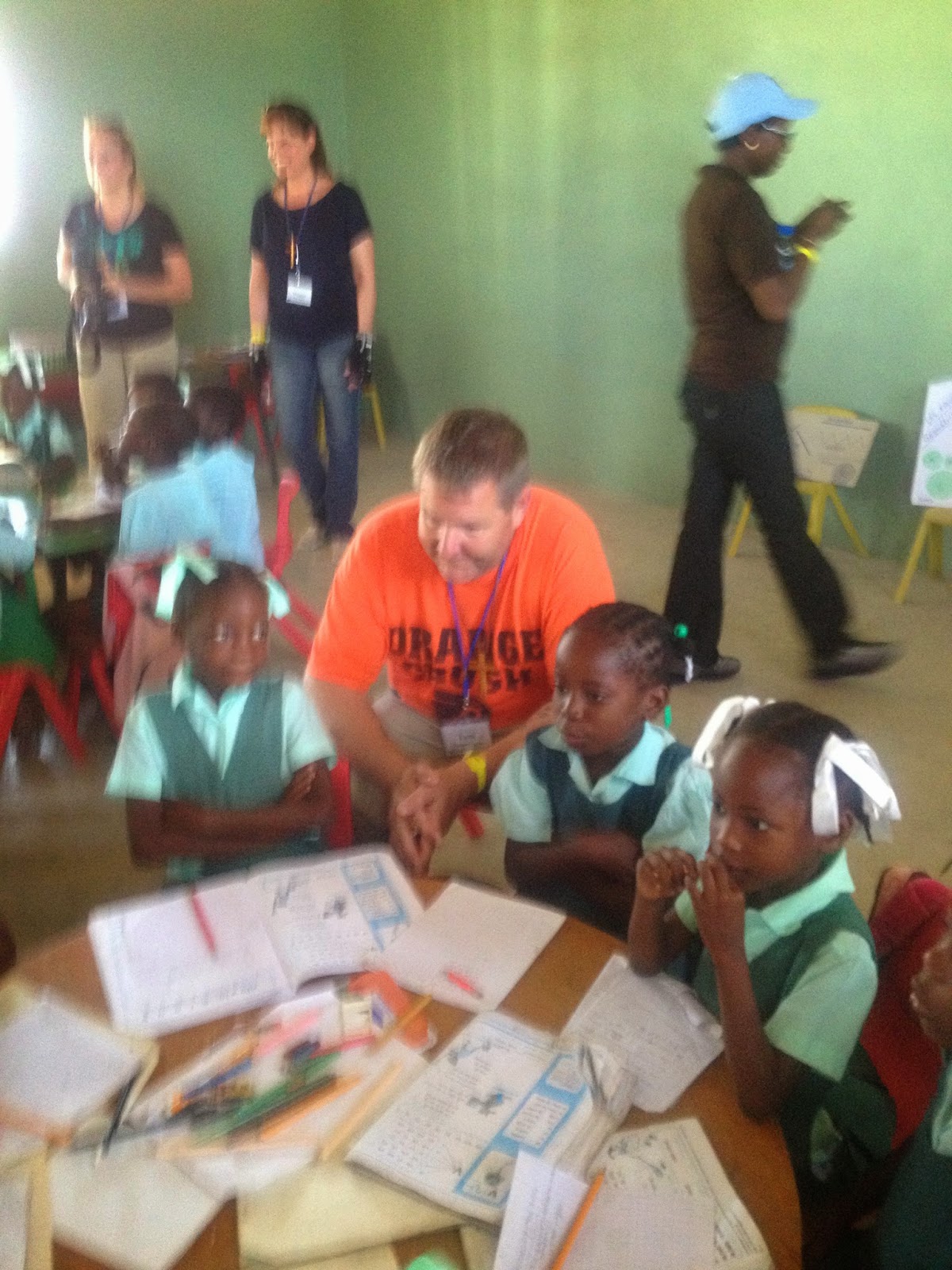 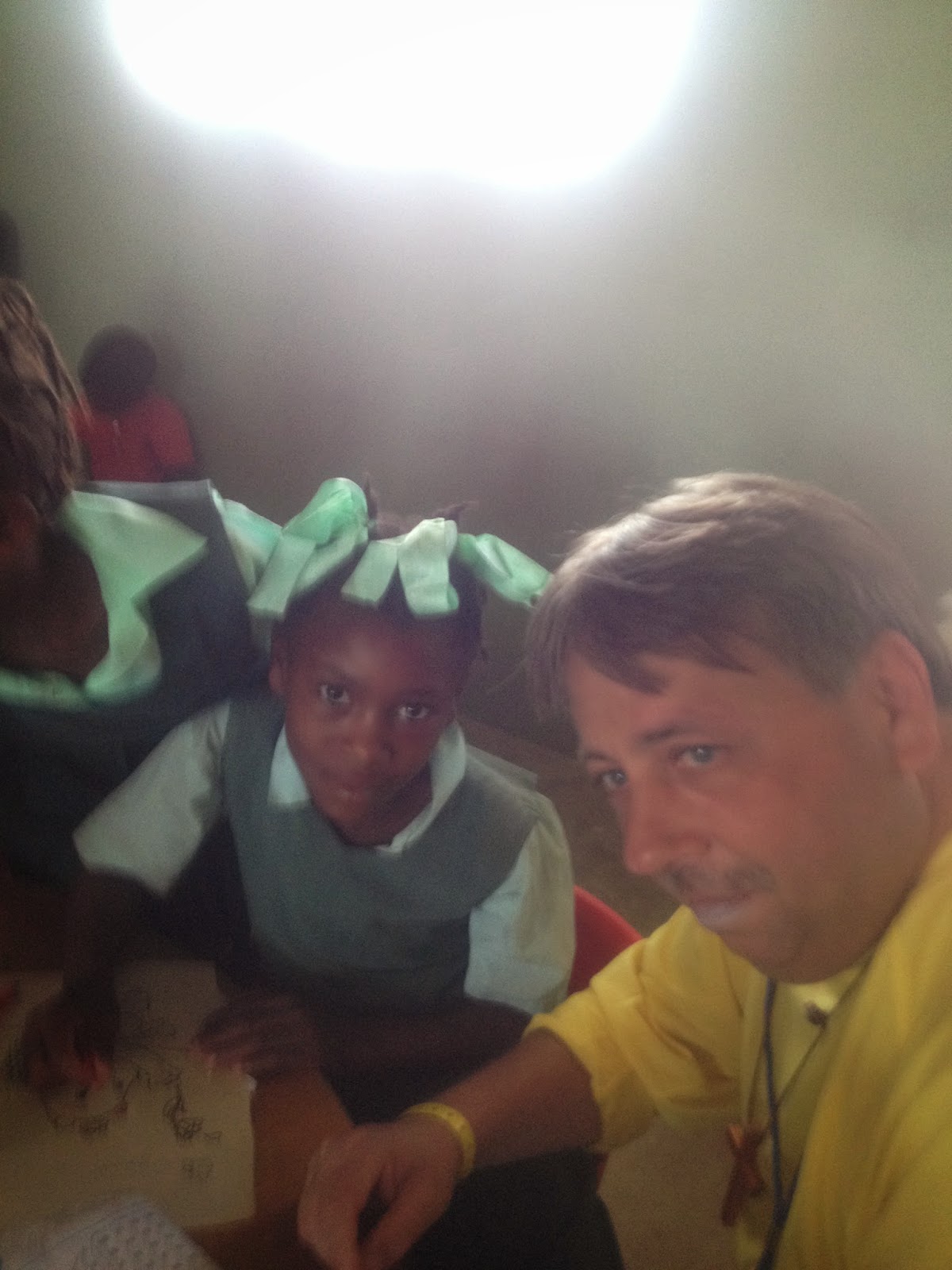 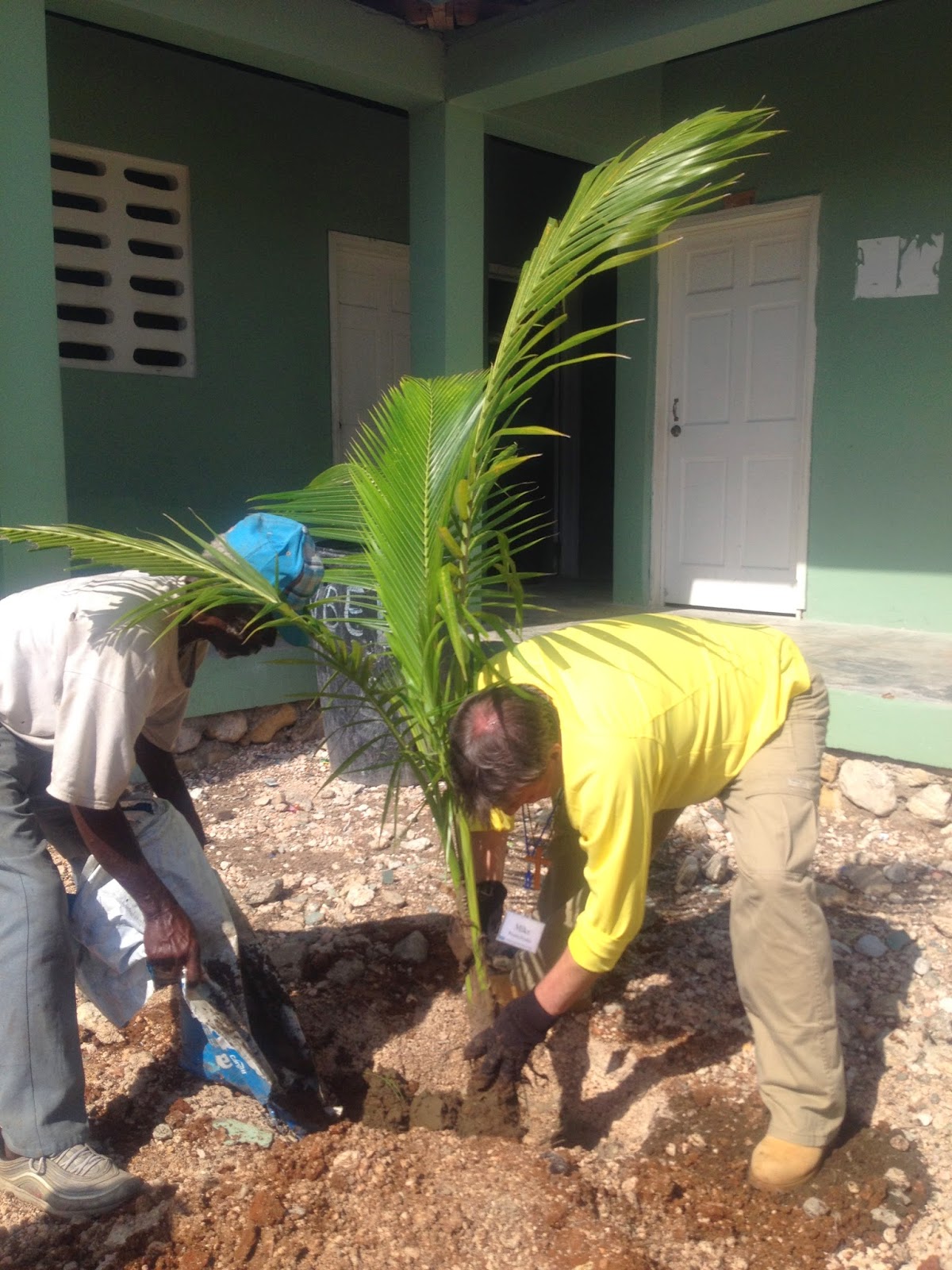 We left Titayen and had lunch on the bus on the way to our next stop.  Lunch was hoagies and steaks - NOT EVEN CLOSE!!!  We are now heading to a village named Pon Batay to review housing needs. There are approximately 300 people in the mountain village.  There are new homes being constructed by Food for the Poor but the construction is moving slowly.  We got the chance to see the "homes" they live in currently and tour the new construction.  The villagers are very appreciative of the work the organization is doing and they are very hopeful for the future. The following pictures tell the story. 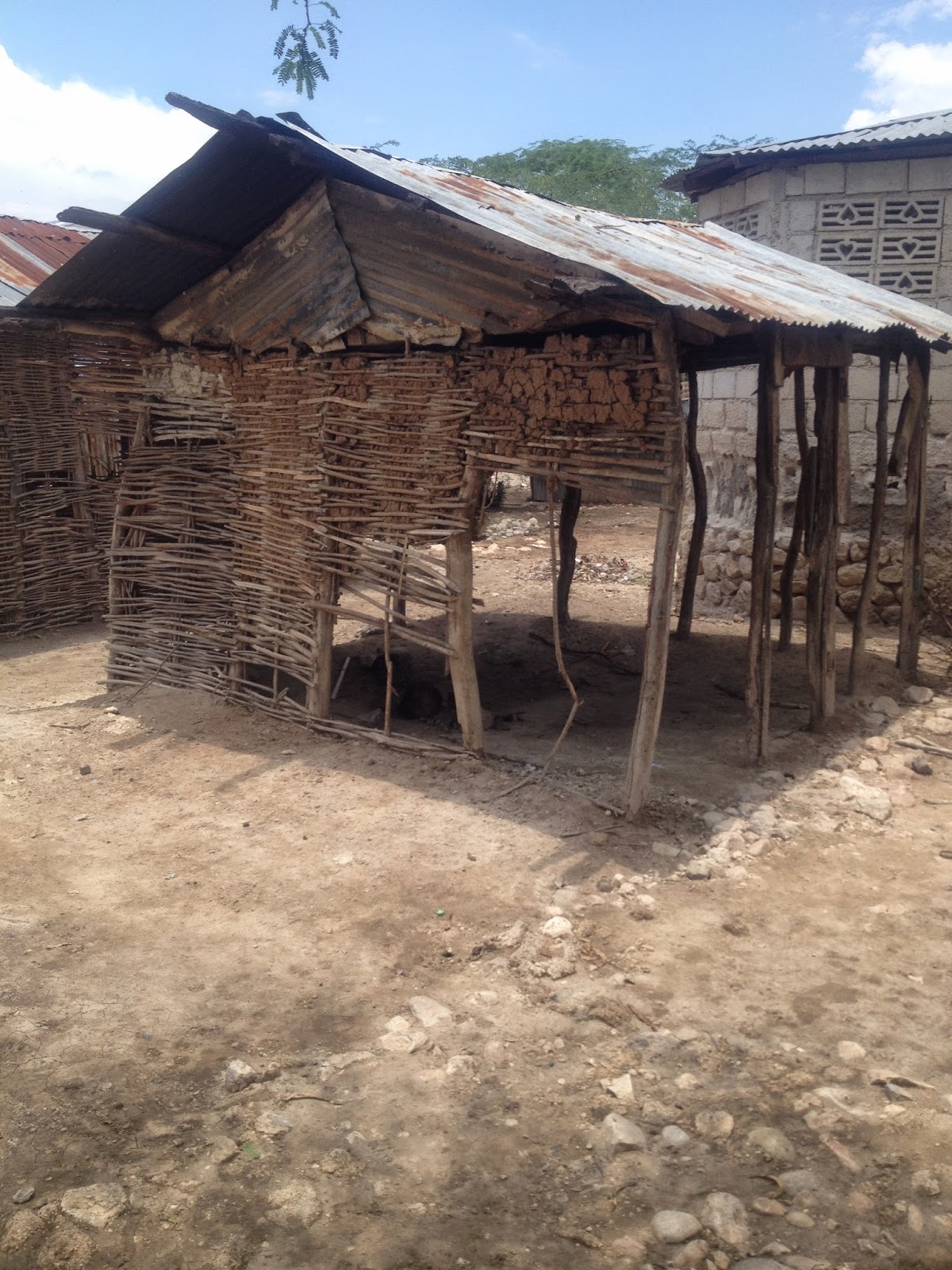 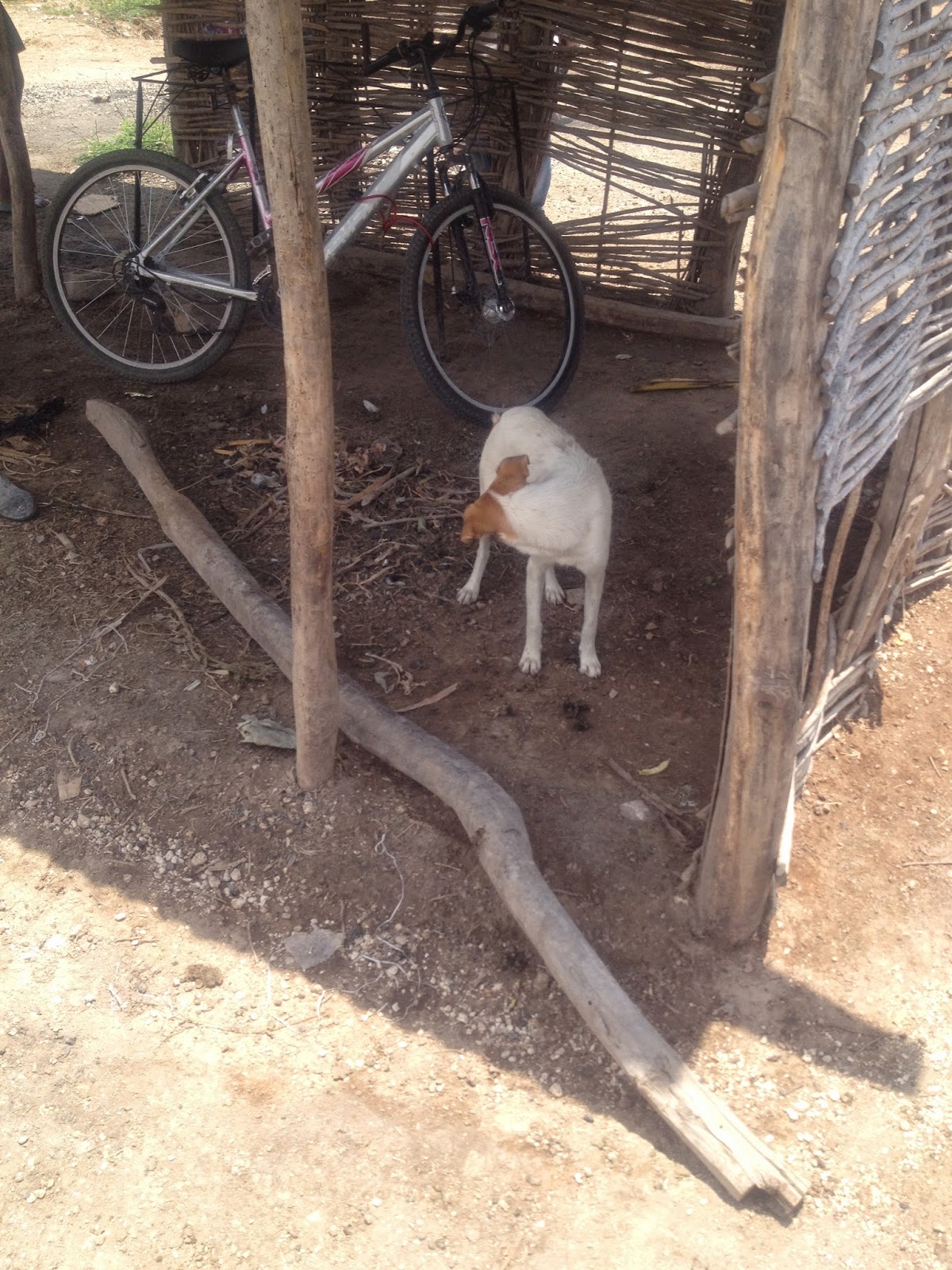 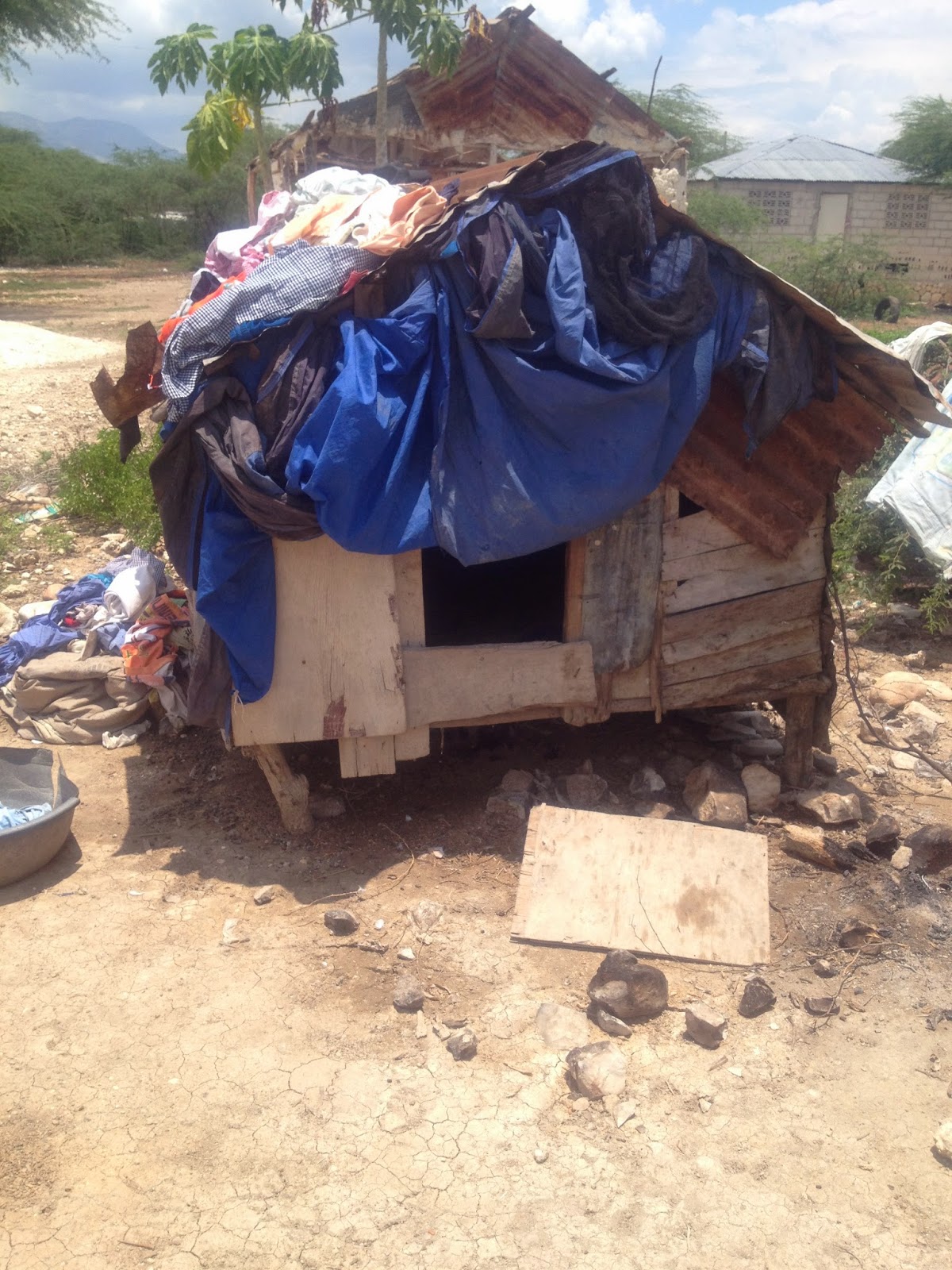 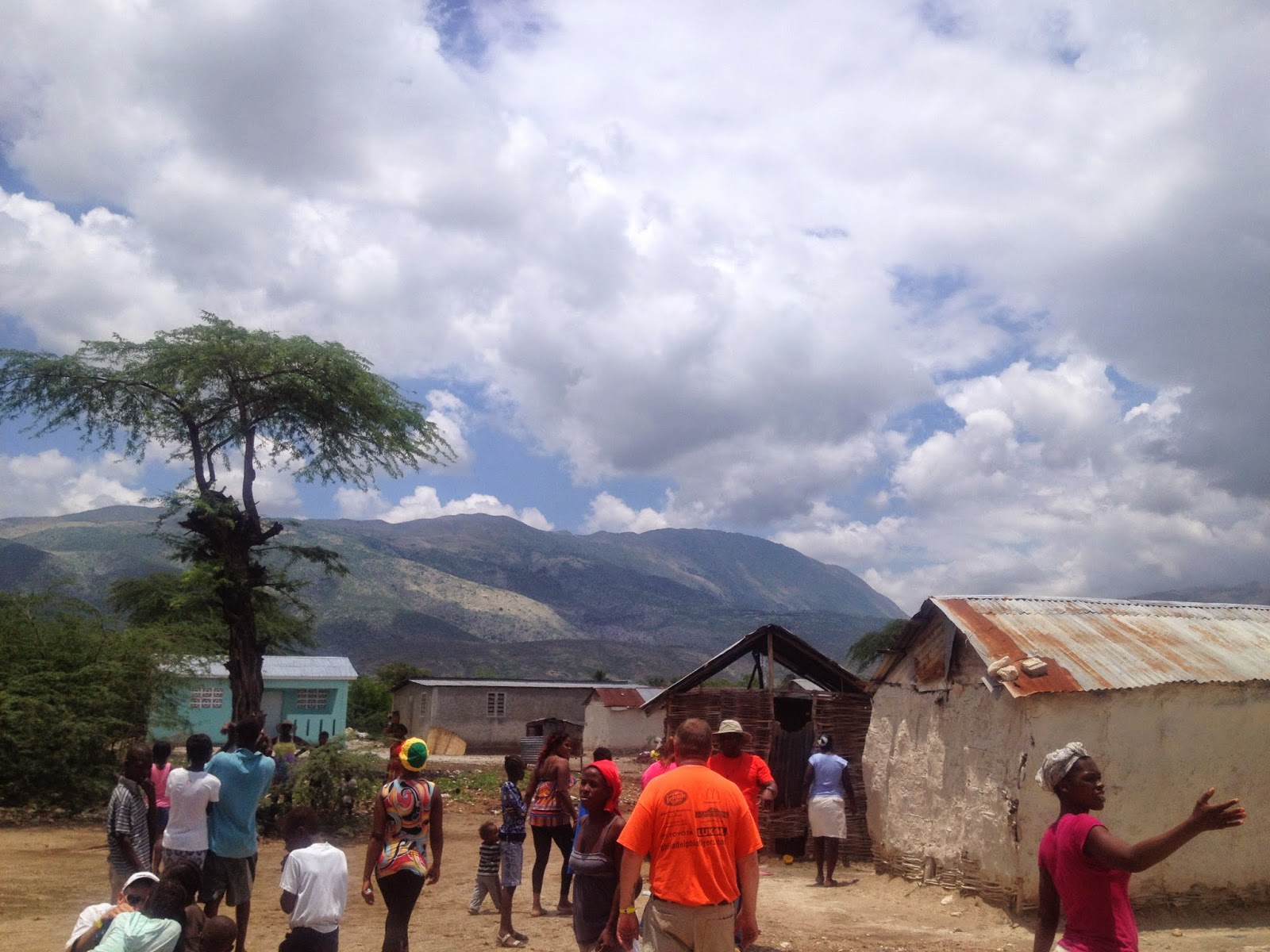 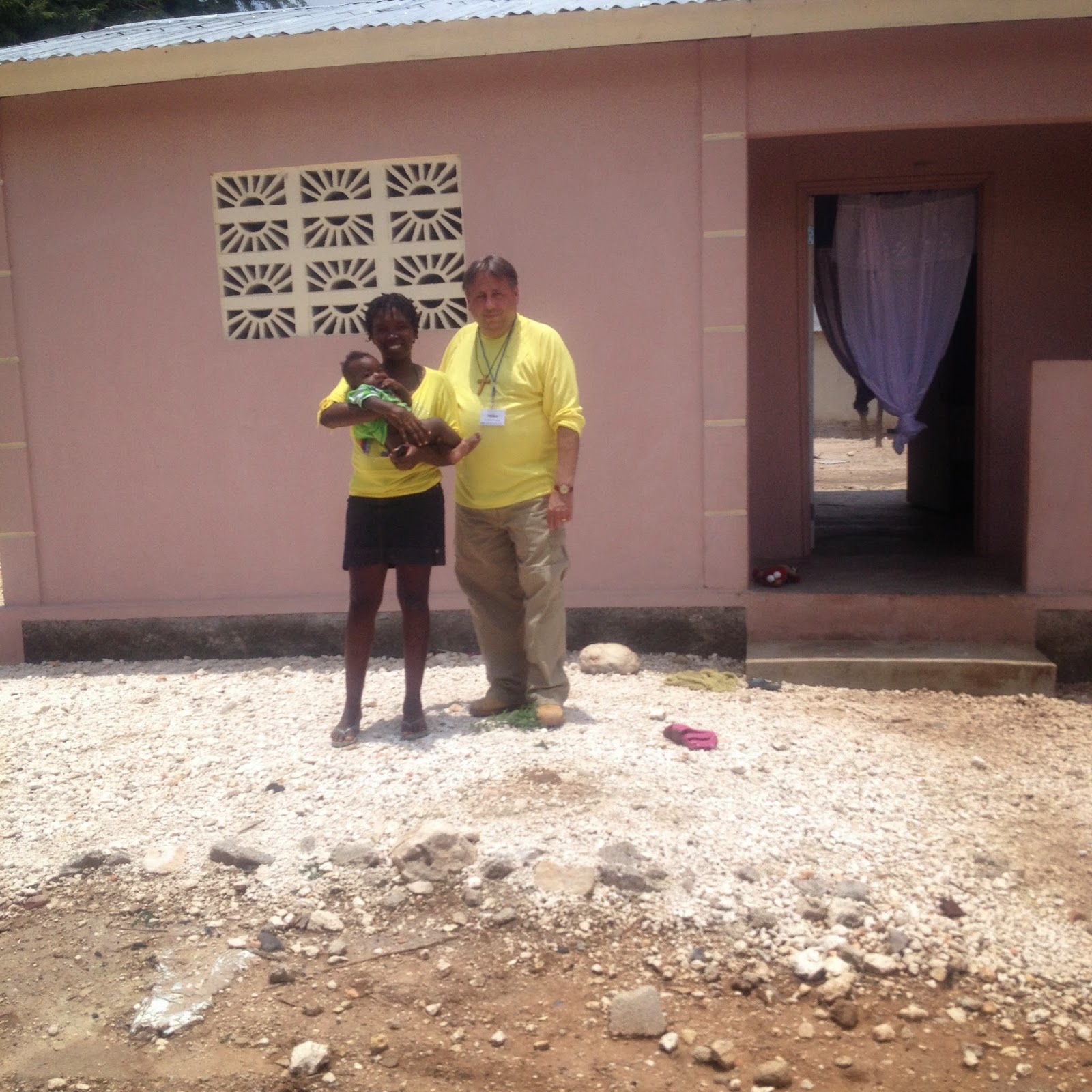 The day ended with dinner at the hotel.

5/8/2014
The day begins with breakfast at 7:00 AM.  The bus departs the hotel at 7:30 AM for an "elderly village" in Port-au-Prince.  The village is run by Korean nuns and is over 9 acres in size.  Each resident lives in a single, one room hut.  The positives for the village is that the residents are off the streets of Port-au-Prince and our provided regular meals,clothing, medicine, etc.  Our task includes cleaning the huts and recreation center - mopping, moving tables and chairs, etc. 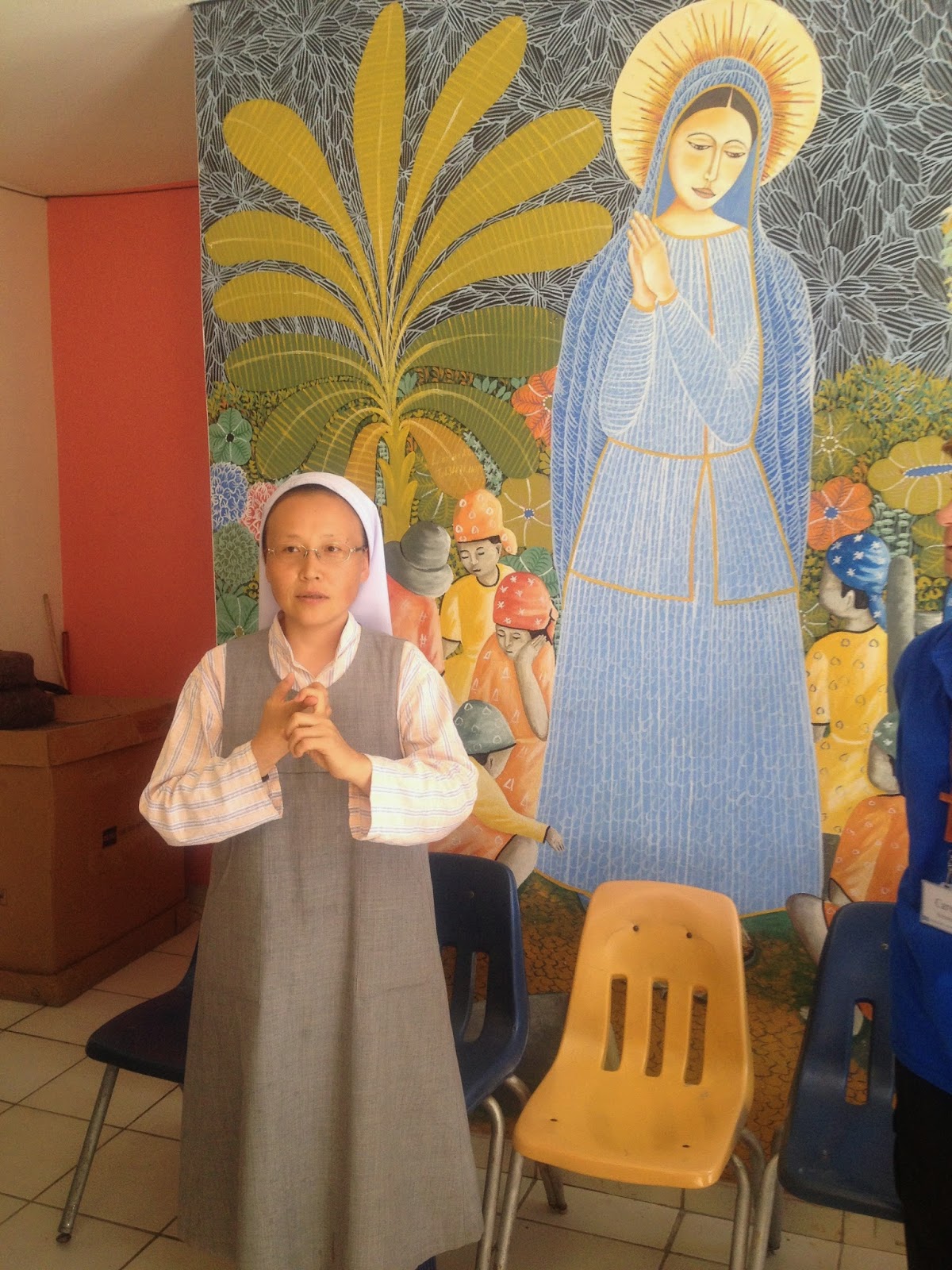 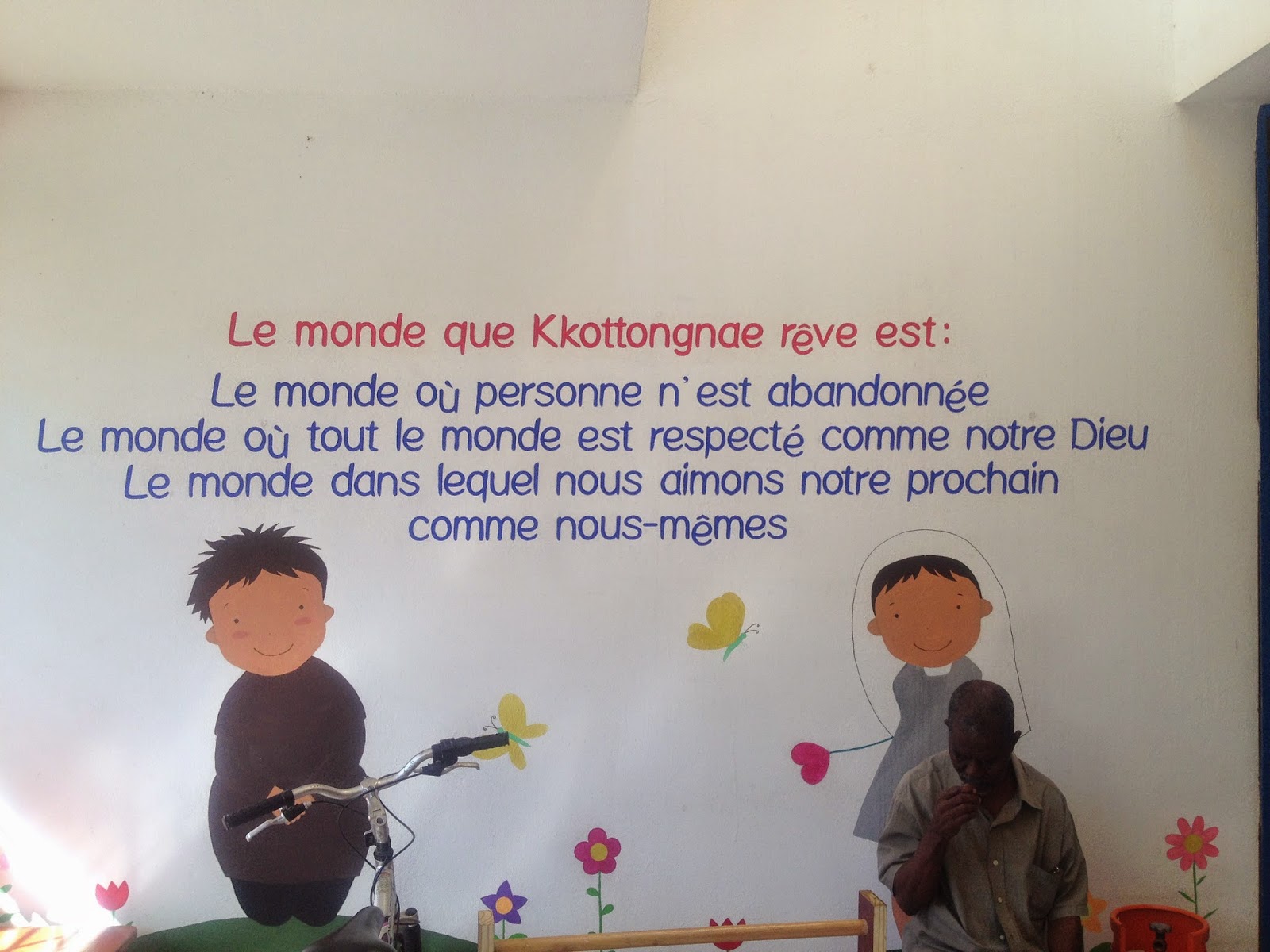 Once the cleaning is done, the dancing begins!! 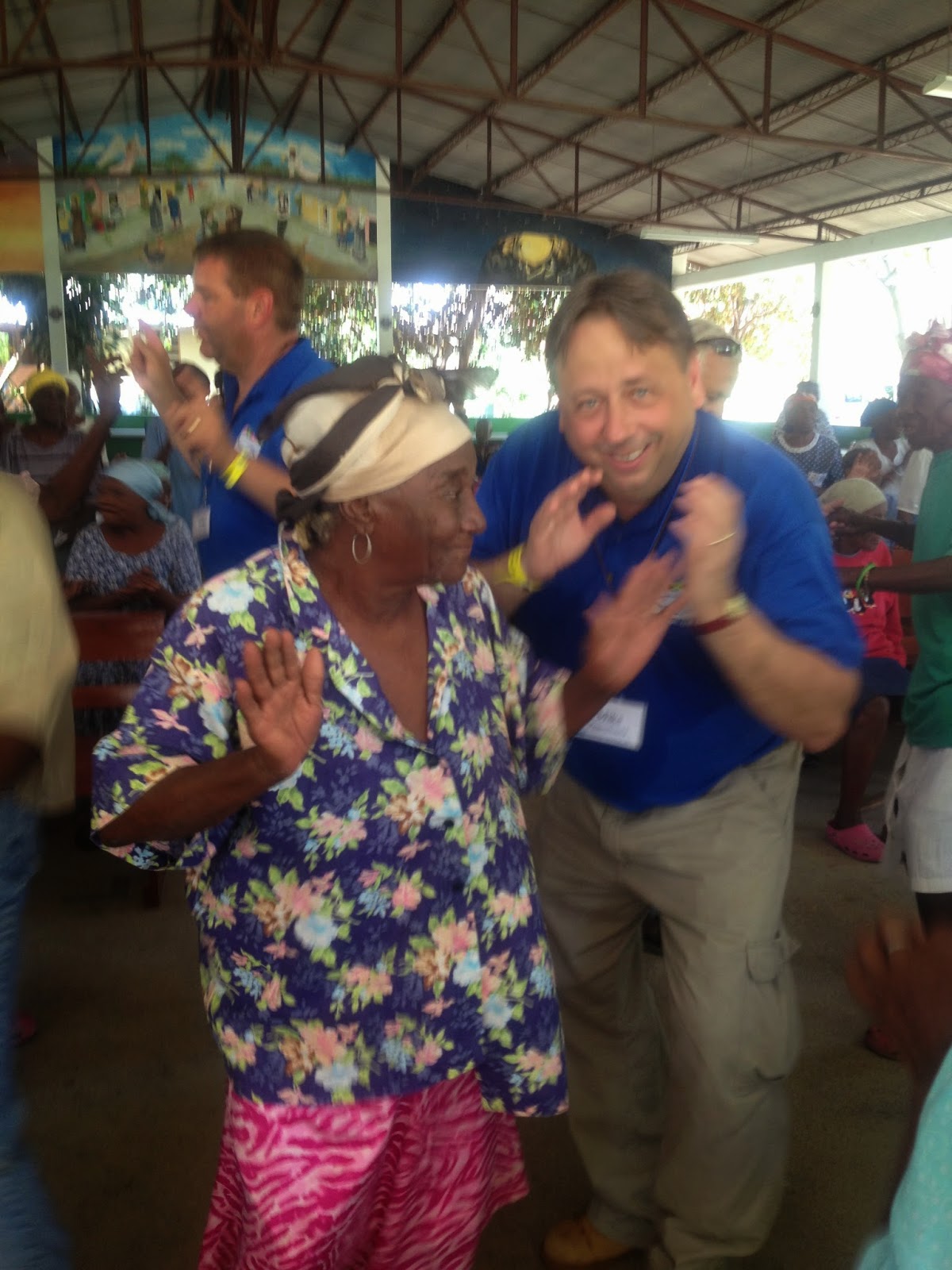 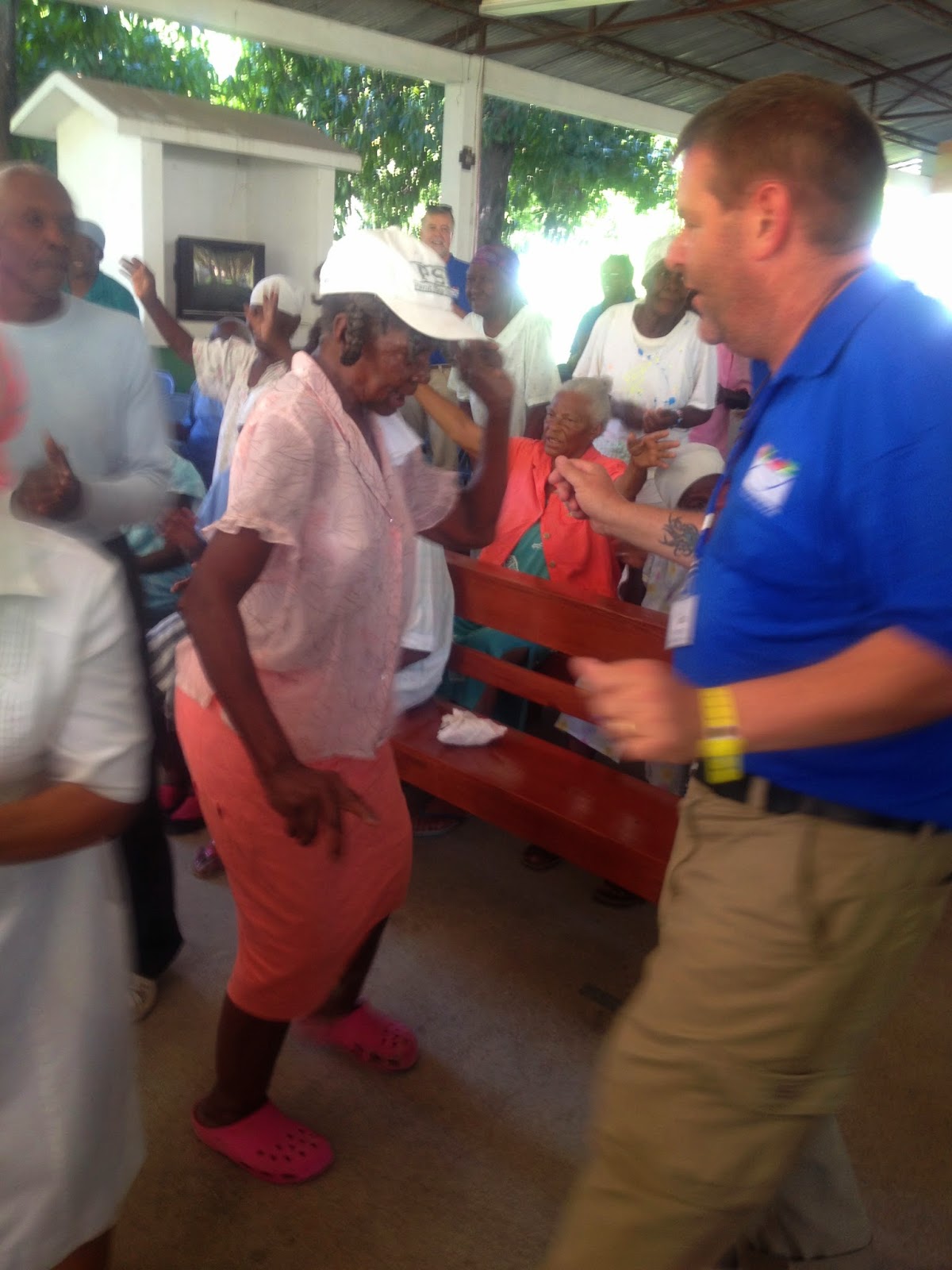 Once the dancing was over - it is off to the aquaculture farm to view efforts to improve the eatable fish population.  The farm consists of 6 ponds which is populated with male and female fish which are injected with hormones to stimulate the mating process.

After the aqua farm, it is off to the Little Children of Jesus Home in Port-au-Prince.  The home's residents are mentally and physically handicapped children who have been rescued from the streets of the capital or found abandoned on the steps of the home.

Though the children are well cared for, the ward was very graphic and had a very strong emotional impact on the team.  Due to nature of the scene, only one picture - Tom with a "water-head" child - is displayed. 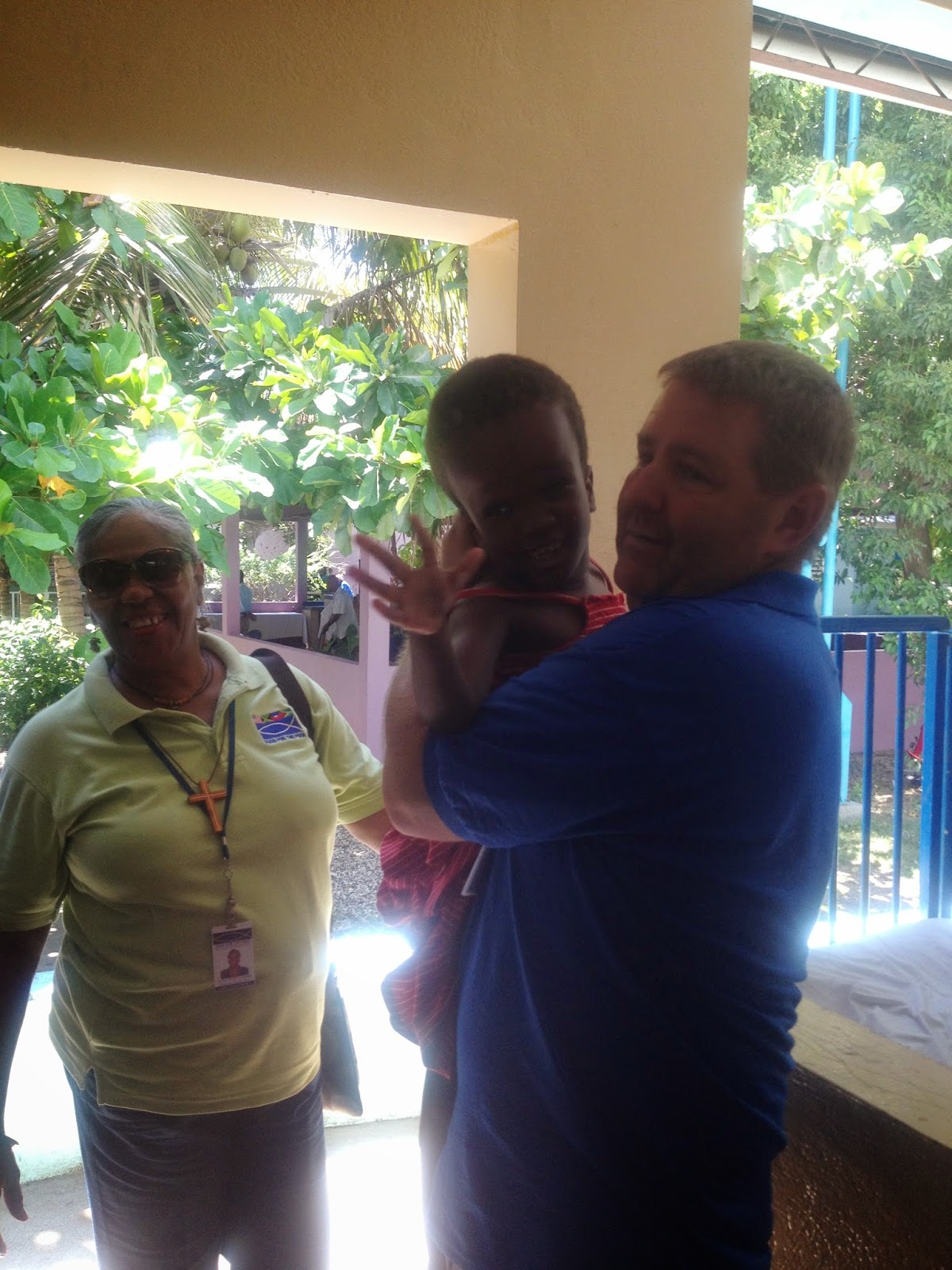 The day ended with dinner back at the hotel which consisted of shrimp and bbq goat - and the goat was pretty good!!!!!